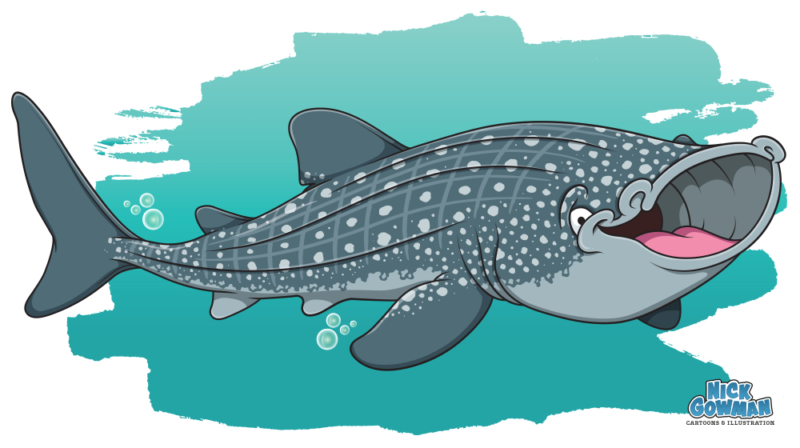 So why do a Whale Shark cartoon drawing?

Whale sharks have always been fascinating to me, even from a very young age. The sheer size and distinctive spotted skin always made this a memorable shark species to me as a kid.

Noticing that there is also an official ‘whale shark day‘ celebrated each year too, I just had to jump in and celebrate with a new cartoon!

I’m thinking this could be the start of a whole series of shark cartoons, as I do have another cartoon shark currently swimming round my portfolio!

What do Whale Sharks eat?

Obviously, being a shark the first misconception is that the Whale Shark would be dangerous!

Not the case! It is one of only three known shark that are filter-feeding species. It feeds on plankton, krill and other small sea creatures. So, no need for a bigger boat with this one!

As with most of my cartoon characters, this one started out as a pencil sketch.

I begin with a line of action – a simple curve to give a feel and direction for the character. Then I build up the character design with a series or rounded shapes, in this case some oval shapes.

I then moved onto the face and mouth and exaggerated them slightly, as this is the focal point of the whale shark. Once I have the body shapes and some oversized fins in place, I join everything up into a rough composition.

I chose a nice, deep blue-grey tone for the skin of the shark, choosing a nice contrasting lighter tone for the belly.

I then went about adding in a loose pattern with a custom, pressure-sensitive brush. This allowed me to build up concentrated areas of spots around the mouth and then space them out as they continue up the body.

The final stages were some small areas of shading and that big, pink tongue.

Can I help you with some cartoon sea creatures?

If your next project could do with some happy and cheerful sea creature cartoons, please get in touch!